The COVID-19 pandemic put many people’s plans on hold. But for Tyler Pavlik, he didn’t let the global crisis stop him from following his dream of starting a career in the United States Air Force. Proud mom Sarah Pavlik, Balestrieri Environmental & Development’s Accounting and HR Manager shared her son’s cornerstone experiences with the air service branch of the United States Armed Forces.

As to what motivated Tyler to join the Air Force? “I have no idea.” said Sarah. Her leading theory is that growing up near military bases in Georgia, Tyler and other kids would line the streets and cheer for troops returning home from service. Tyler studied the Air Force and what it takes to be a dedicated member before speaking with a recruiter in the fall of 2020. “A military recruiter is responsible for talking kids into joining, but Tyler approached the recruiter ready to enlist. He told me, ‘I don’t need to talk to somebody. This is what I’m doing.’”

Tyler recently completed his eight-week BMT (Basic Military Training) at Lackland Air Force Base just outside San Antonio, Texas. However, his graduation from BMT wasn’t exactly how he or his family envisioned it. Due to COVID-19, the graduation ceremony was quarantined. Sarah and husband Tim were unable to be in attendance for the event in-person. But considering this young man’s commitment to the Air Force, there will no doubt be plenty of prestigious ceremonies to attend in the future.

Following BMT graduation, Tyler begins the next stage of his training with technical training lasting 55 days. Tyler has opted for a 6-year enlistment term as opposed to a traditional 4-year term. Meaning that when he graduates from this phase of technical training, he will have an Airman First Class (E-3) ranking, a step ahead of most other graduates. This ranking assigns airmen an increasing level of responsibility, which already comes naturally to Tyler. “He made a lot of friends (in BMT) and in the beginning he was the leader for the PT exercises. He liked the respect from other people in that role.”

Tyler’s goals during his 6-year enlistment include graduating with a bachelor’s degree in business. He wants to fly planes, which can only be achieved by airmen who have a four-year degree.

“I’m excited and happy for him, I just miss him a lot. He’s our only child so it’s hard. Tyler leaving me was the main reason I didn’t want him to join. He knows what he wants and he’s going to do it on his own terms.”

Balestrieri Environmental & Development is incredibly proud of Tyler and his blossoming military career. We thank him and all who serve for their commitment to keeping our country safe. 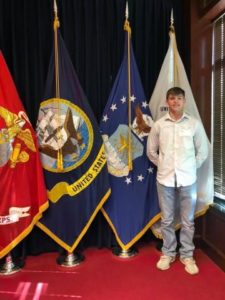 Previous Post - What Are They Doing in There? Next Post - Balestrieri Project Managers Learn from Construction Legends